I have been enjoying iOS7 beta since the WWDC back in June. While I planned to update to the official version, the last beta release was pretty stable so I didn’t feel any particular urgency.

I figured I would do it soon and if I didn’t, apple would prompt (or even force) me to update over-the-air.  What I did not expect was to find my device deactivated. Thanks Apple.

This post outlines the steps I took to get my phone working again.

As you can see from the images this didn’t work… 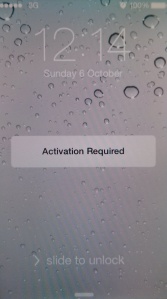 I updated iTunes to make sure I had the latest version and then fired it up, received a few prompts about my phone and tried to update it.

Unfortunately, iTunes thought I was already on the latest version.

iTunes didn’t allow this as I have Find my iPhone enabled. Turning it off via iCloud and restarting the phone and iTunes made no difference.

In this attempt, I downloaded the latest firmware from Apple. In my case, I needed Firmware 7.0.2 (11A501) for iPhone 5 (Global). IPSWDownloader is a great website if you’re not sure which firmware bundle you need for your device.

I then attempted to perform a restore via iTunes but experienced the same problem as the last step.

I opened XCode which alerted me to the expiry.

I then installed the firmware I had downloaded in the previous step. 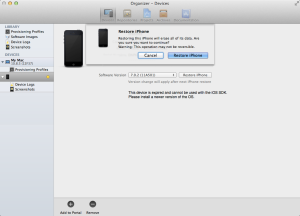 After this, I opened iTunes and followed the prompts to restore from my last backup.

If you’re not a developer it may be possible to restore via iTunes by putting your phone into DFU mode first. I didn’t try this but I’m interested to know if it works for devices with Find my iPhone enabled.